Stone Bunny wipes a cool sweat from her stoney brow, looks around at the mint and exclaims “Shooo-Wheee!  This is too close for comfort!” 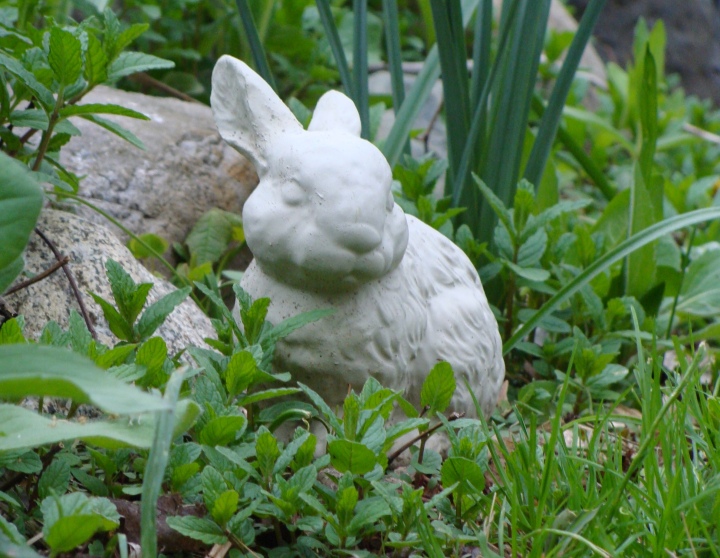 Clay Pig says “I know.  I thought we had it a few days ago but then the darn cold snap came and the mint quit growing.”

Stone Turtle remains unflappable.  “Don’t worry.  It will be fine.  We will make do with what we have.  Pig, you have quite a lot growing around you.  And there’s a little around me.”

They all look to Mary.

“The invitations have been sent.”

“The horses have been practicing.”

“The jockeys are ready to go.” 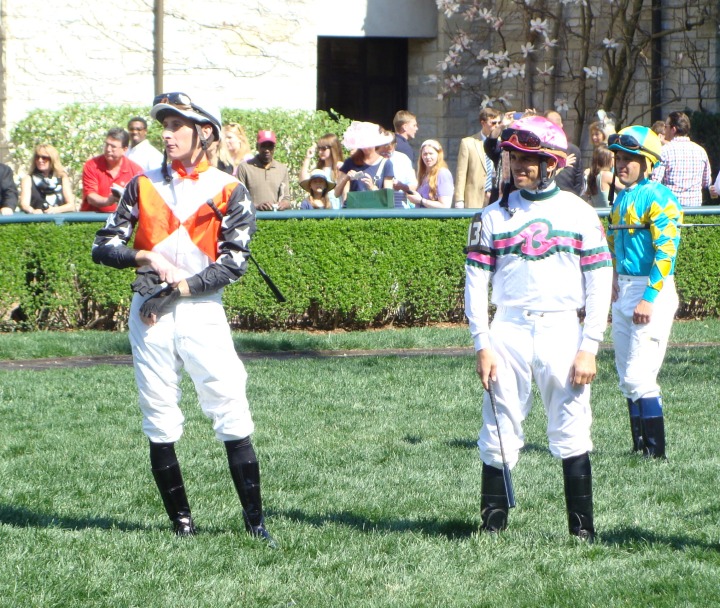 “And soon the horses will be led into the paddock.” 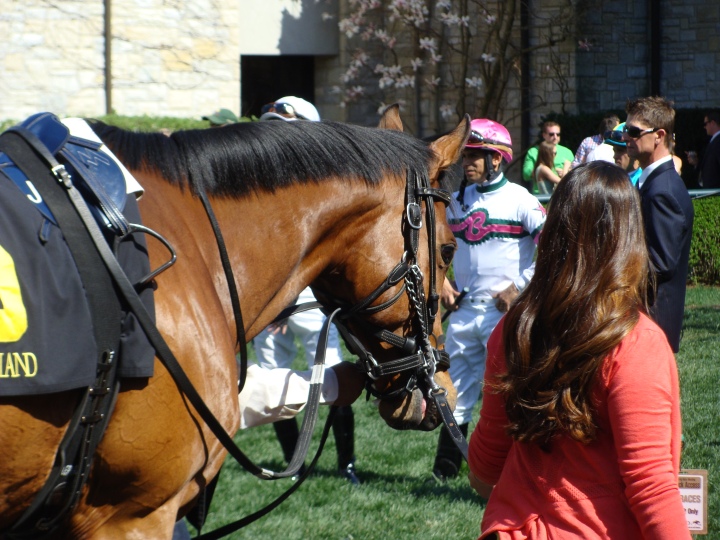 Mary smiles at her friends.  “Oh, I can just picture how the twin spires of Churchill Downs will look today.  Shined and polished, ready for the 140th running of the Kentucky Derby!” 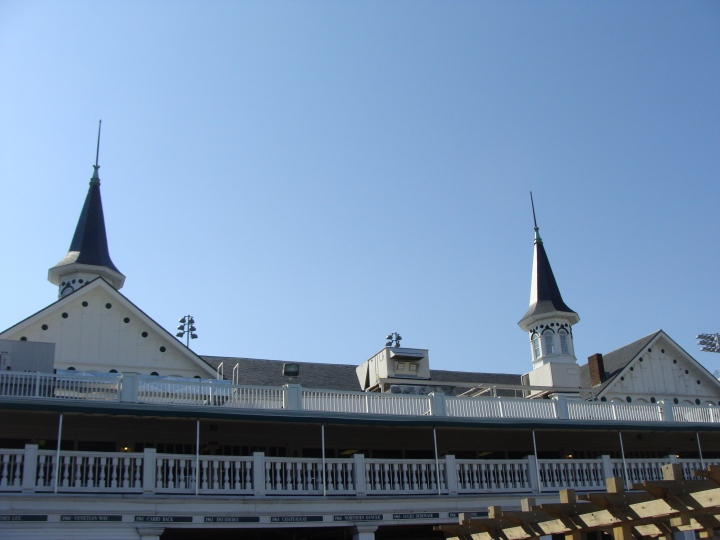 Mary continues, “I’m sure we have enough spearmint for several big batches of juleps.   I know we like to provide more, but we weren’t exactly in charge of the weather this spring, now were we?”

The others all relax.  Mary has a wonderful way of calming everyone down.

The fact is, a Kentucky Derby party without mint juleps would be like Oktoberfest without beer.  And you need mint for a mint julep.  Spearmint, to be precise.  Oh, a little peppermint gives the drink some tang, but spearmint is the critical ingredient.  Plus whiskey.  Bourbon Whiskey.  Distilled in the great state of Kentucky.  Whiskey, mint and sugar, served over ice in a glass which bears the name of a previous Derby winner.  A straw, a handsome garnish of mint and……….. Mmmmmm Tasty! 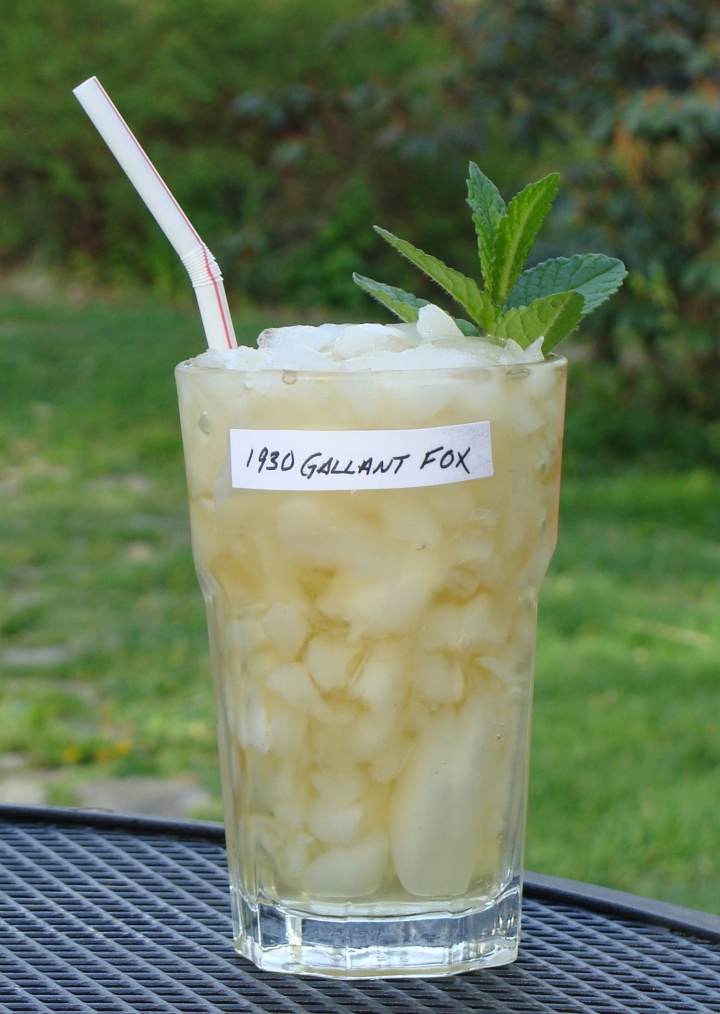 Iron Turtle puts it all in perspective.  “I know,” he says “We sweat the mint every year.  We start watching a few weeks out, wondering if the mint will grow by Derby Day.  This year, after a singularly harsh winter and a cold, lingering spring, we are cutting it close.”

Iron Turtle continues.  “Think about this, though:  if our garden were any further north, we would need a hothouse to grow enough mint for a honest Derby Party.  I would say that we are just about as far north as we can be and still rely on good old fashioned back yard spearmint for Derby Day.  And whats really interesting about that, is how that fits in with our area.   The Referee says that, from a cultural and demographic perspective, there are many reasons to think of central Indiana as the northern most edge of the southern USA.  Isn’t it interesting that we are also the northern edge of Mint Julep country?  Well, unassisted Mint Julep country that is.  We wouldn’t want to discourage the fine folks of Minnesota from celebrating Derby Day, now would we?  I just note that they would need some help growing enough mint for their party.”

Stone Puppy has a great idea.

“Hey!  I got an idea.  What about Bee Balm?  Its a member of the mint family.  The Bee Balm is growing nicely this year.  Has anyone ever tried a Bee Balm Julep?”

Brass Frog gives Puppy a withering look which is mimicked by the rest of the gang and Puppy lets that idea slide on by.

Editor’s Note:  The usual ground rules for this blog – being that all pictures are taken on the property and presented in approximate real time – had to be suspended for today’s post as we neither raise nor race thoroughbred horses here.  Shucks.  Some of the pictures were taken at Keeneland near Lexington, Kentucky last month.  A couple, including the one below, were taken at Churchill Downs in Louisville, Kentucky.  Happy Derby Day!