Brass Frog considers himself an expert in matters pertaining to the weather, thank you.  Not only is he a consummate analyst of patterns, precipitation and possibilities, he can also feel it in his bones.  Frog would like you to know that this moment Sunday afternoon was the moment of change:

The moment when the gorgeous, warm weekend began to give way to the next round of Polar Vortex, as the humans are calling it.  Yes, Frog would like you to know this.  He hopes that you, armed with such valuable information,  might cease being so giddy about another brief thaw in the middle of winter.  Frog could feel it coming.  Eleven degrees below zero on Tuesday morning.  Hhmmppff!

Stone Bunny, ever the optimist, would like to point out that, yet again, the rhododendron perked back up in the warmth on Sunday:

Oh, she doesn’t want to show you a picture of the poor bush this morning.  It is rather depressing.  Bunny wants us to have confidence that we can handle the deep freeze as good old central Indiana weathers the toughest January in years.

Stone Puppy is not really concerned with all that.  He thinks these tracks made by an exuberant dog are the thing today:

Stone Puppy thinks it is really cool that this scene is now so frozen, it is like stone.  Dogs and stone.  Two of his favorite things.

Iron Turtle figures that if we are going to concern ourselves with tracks in the snow, we really ought to check into this highway of tracks made by deer, dogs, and variety of woodland critters: 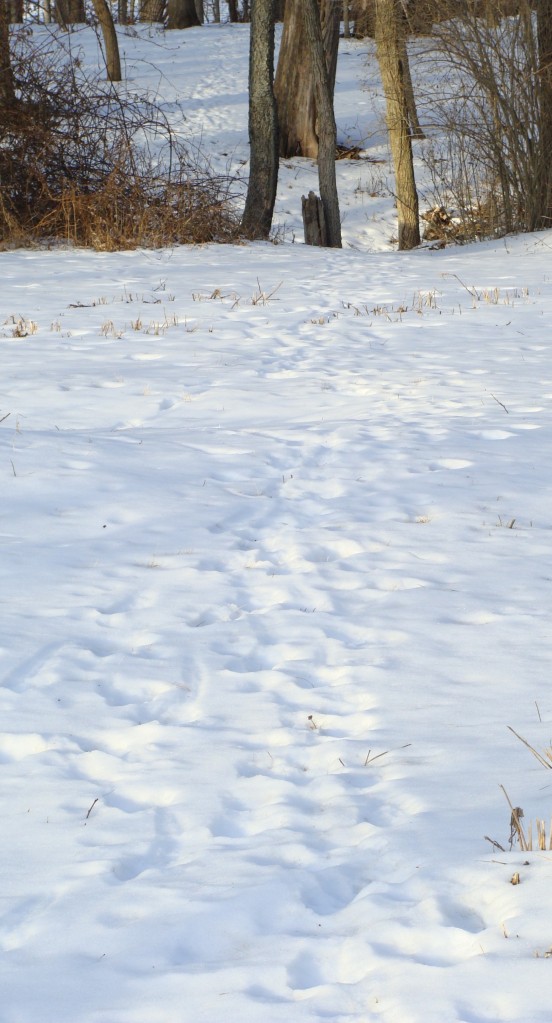