The council is in session.  Mary presides.

Mary always presides.  It is inconceivable that anyone but  Mary would preside.  Stone Bunny has a lot to say.  Stone Bunny is passionate about the garden.  She has been around the longest and always looks forward to the future.  Gnome is more reticent but just as passionate.  He is older than Stone Bunny but new to this garden.  Brass Frog listens carefully, waiting his turn.  Iron Turtle is impatient.  Stone Puppy is nervous.  Clay Pig hums a little tune in her head.

The thaw has come and the moment is at hand to plan for the new growing season.  A few snowdrops were spotted poking their little heads out of the ground before the big winter storm.  The snowdrops will come in force soon.  Very soon!  The Council has much to decide.

Mary reviews the recent developments, “Let’s all appreciate that we have had several wonderful years in our garden.  The old timers are well established and prospering.  The newcomers show such promise.  Please note that it was only two years ago we engaged in the great wildflower experiment.  Cast the seeds hither and tither, see what happens.  It was a great year, that first year of wildflowers.  Such élan!  Last year was even better.  But we have a few things to work on this year.   We had a big return of perennials last year and we all know what happened everywhere the wildfowers grew.  Plants all intertwined and growing amongst each other.  Popping up from randomly cast seeds as they did, its all a bit chaotic.” 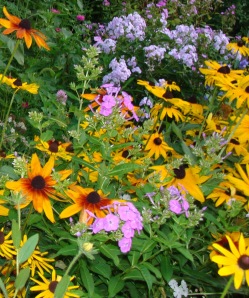 “Fun.”  she continues.  “Fun and  Beautiful.  But chaotic.  Some of our specimens are going to be large this year and may need more space and light.”

“It was the Ref’s fault,” blurts Stone Puppy.  “He just threw the seeds any old way and he made a mess.”

“No, remember, he raked ‘em!” says Iron Turtle. “The Missus told him he shouldn’t rake ‘em, but he raked ‘em.  Screwed it up.  We been trying to keep peace with those newcomers ever since.”

“Gentlemen!” states Mary, gently, but with no question that she means for them to be quiet.  “Our Referee is a fine fellow.  He is quite capable and he works very hard.  Please.  You may not always agree with his methods or his actions, but he does try to implement our plan.  And he truly cares for our little ecosystem.”

She looks around.  No one says anything.  They won’t cross Mary.  They respect Mary.  They downright love Mary, but the tension is palpable.  The Referee incites such passions amongst the members.

“As I was saying, last year was wonderful and this year we have some challenges to address.  First, though, I would like to hear from each of you.   What did you like the most about last year.  What specific element spoke to you…”

Stone Bunny can’t stand it.  She pipes right up.  “Ooooh, I loved it all.  It was so much fun.  Zinnias and cosmos and elephant ears and nasturtium.  Big tall yellow flowers and big tall pink flowers and…” 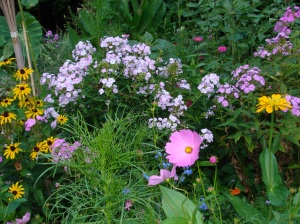 “How about your favorite part.” interjects Mary.  “Your very favorite part of last year, Bunny.  The one thing you loved the most.”

Puppy is flustered.  (Whoa! He thinks.  Me?  Already?  Me ahead of Gnome?)  “My favorite thing?”  he puzzles.  “Mine?  Umm… the grasses.  Yeah, the grasses!  Oh yeah, they had a great year last year.  Just great!  Reaching for the sky and pluming like pros.  And we’re gonna get the Ref to split ‘em and move some of ‘em, right?.   The grasses are King!” Puppy is satisfied with his answer.  One can always depend on ornamental grasses.

Gnome rubs his chin, looks around at the eager faces.  Everyone respects Gnome’s opinion.  Gnome likes that.  “I’ve got to go with the sunflowers again.  I know they get a little ratty…”

“Ratty??!!!” interrupts Puppy.  “They freakin’ fall over!  That’s not ratty.  That’s on the ground!”  He looks around.  Everyone glares at him.  It wasn’t his turn.  He interrupted again.  He jumped Gnome!  Ooops.  (Gotta try harder – this is Council, after all.)

“I was saying,” says Gnome, glancing sideways at Puppy, “I’m going with the sunflowers because they attract the goldfinches.  I personally consider that to be the most remarkable thing that has happened in our garden lately.  Goldfinches hanging from a sunflower, picking at its fresh seeds.  That’s cool, my friends!”

“Thank you.” Says Gnome with a subtle nod.

“Brass Frog.  What did you like?”  asks Mary, pressing on.

Brass Frog does not hesitate.  Brass Frog knows his opinion is accurate.  He never interrupts because he doesn’t need to.  They will seek his counsel.  They always do.  “It  is my considered opinion that the most outstanding gardening treasure last season was the red impatiens.  I realize that they came in as common annuals in a flat.  Not the Ref’s usual style.  And I appreciate that they came in late, introduced as distressed greenhouse flowers into the summer garden.  But I must say that with a little rain, they gained steam and they grew into a most remarkable stand which bloomed until frost.  Yes, indeed.  The red impatiens were definitely our garden’s treasure last year.”

Puppy and Turtle look at each other.  Frog!  He wears them out.  Always full of himself.

“And you, Iron Turtle.  What made your soul sing last season?” asks Mary.

“Awww, Mary.” says Turtle. “ You ask in such a sweet way.”   Mary knows that Turtle was fully prepared to point out what went wrong last year, not what went right.  Turtle realizes that she really doesn’t want to hear that just now.  “You know, I think the sweetest moment was the bee balm.  We have such an excellent strain of pure red bee balm.  Good ol’ Monarda Didyma.  I love bee balm and it put on such a show last year.  And, I must admit, the Ref did a great job a clearing out the phlox so the bee balm could breathe.  There were a few weeks last summer where we were like the Bee Balm Channel.”

“Here Here!”  shout out several of the others.  Every single member of the Council loves bee balm.

Pig looks up and shakes herself free of the tune in her head.  She wasn’t really paying attention.  She rarely does.  Clay Pig is really a clay ocarina shaped like a pig.  She is a musical instrument, not a garden critter, thank you very much.  Why anyone would have the wildly dangerous idea to put her in the garden is beyond her.  She looks at her friends and notes “I always like the song in the trees.”

“Yes Pig, thank you.”  says Mary.  “I know how you love music, but the trees are generally outside our sphere of influence.  How about something smaller?”

“OK” says Pig.  “I think that the cherry tomatoes were quite nice and I really liked the way they  grew into the lavender.  Who would have thought?  Cherry tomatoes and lavender.”

The others laugh.  It was funny, you know.

Everyone looks at Mary.  It is her turn.  She always goes last because she always gives everyone else a turn first.

“I think you know what I’m going to say.”

They all grin.  Mary.  So smart, so deep and so easy to read.

“I am so happy to have Gloriosa back.  Good ol’ Mr. Fuzzy.  Oh, he bloomed so vigorously and so variously, and in so many places for so long.  He really put on quite a show.  And we have so many different specimens of him to share.  I do love Gloriosa and I am so very excited to share.”

A sense of excitement passes through the Council.  Mary always knows how to hit the right note.  She washes away all the petty concerns and brings it around to sharing.  Sharing and caring.  Mary gets it.  She always reminds her friends what is important.

She encourages the others, “Let us close our eyes as we stand amidst this snow and remember the season that was.”