Mary says “I would like to talk about seeds.”

Yarrow hits the panic button.  Oh No!  he thinks. Seeds! This is not good. I can barely hear.  This darn snow is muffling everything.  Yarrow’s heart races.  The Council is going to discuss seeds.  SEEDS!!  The most important discussion of the year.  Think about it.  One handful of seeds could contain hundreds of plants.  The whole social dynamic of any part of the garden may be radically altered with one carefree cast of seeds from the Ref’s hands.  Yarrow absolutely has to get this critical piece of intelligence back to the gang in the pub.  He can’t let them down.  They are stuck below, waiting for any word about the Council’s intentions.  They are depending on him.  Oh, how Yarrow wishes he could hear more clearly.  This darn snow.

“Snowdrop!”  He yells.  “Snowdrop.  Can you hear me?  SNNNOWWDRROPPP!”

Nothing.  Snowdrop is buried under fresh snow. 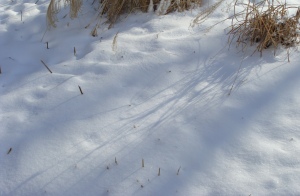 Snowdrop cannot hear him, nor can she hear the Council.

Who else? He thinks.  Who else can hear?

“HELP!  IS ANYONE OUT THERE?  CAN ANYONE HEAR ME?”

Yarrow is taken aback.  Lavender!  Of course.  Lavender.  She can hear.  She can always hear. She is big, only partially covered with snow.

But Lavender is no help.  She spends the entire year up top.  She never goes below. Yarrow has never seen her in the Pub. Not once – Hey – wait a minute. Yarrow remembers a conversation he had with Globe Thistle a few years ago.  Thistle told him that when Lavender was young, she was a regular in the Pub.  Thistle said she struggled terribly to get established in this garden.  Ref always planted her in the wrong place and she would seek refuge through the winter, nursing her illness.  It was only when the Lady planted her in the well drained flower box that she grew strong.  Once her feet could stay nice and dry, she was happy.  Thistle said Lavender is touchy.  He said she likes plenty of water but can’t handle wet feet.  She grew strong in the flower box.  Now she’s big, fancies herself more of a woody stemmed bush than a root perennial.  She doesn’t go below.  She doesn’t need to. She does, however, know the way, with plenty of strength cross the divide and back.  And she can hear!  Yarrow needs her help.

Yarrow puts on his sweetest, silkiest voice.  “Lavender……you beautiful bush.”  (A compliment, he hopes.)  “Lavender, honey.  We need you.  Can you hear the Council?”

“Of course I can hear the Council.”  replies Lavender.

“Oh, Lavender.” gushes Yarrow.  “What are they saying?”

“Seeds.  But you already knew that.” 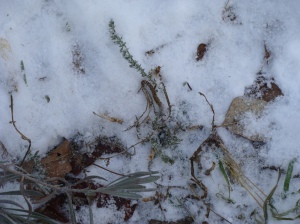 “Oh, but Lavender,” continues Yarrow, “You are big, up above the snow.  You can hear clearly.  I bet you still know the way to the Pub.  Lavender, I’m begging you, please!  Will you report to the others, tell them what the Council is saying?”

Lavender pauses.  On the face of it, that is a terrible idea.  The Pub.  It must be crowded down there at this time of year.  She thinks about it a little.  Yarrow gives her a wildly encouraging look.  She warms to the idea.  It could be fun.  It does get a little lonely up here through the winter.  And it must be frustrating for the others, relying on intermittent reports from that scatter brained Yarrow.  The whole community is down there.  Hmmm.  They might be glad to see me.

Yarrow lets out a huge sigh of relief and curls up with the snow. I did it, he thinks to himself. I saved the day again.